While sipping tea with my buddy Evan in the Coffeehouse (Normal, IL), he and I talk about the usual: The Revolution of the Proletariat. We are concerned about the division of wealth in this country and how the poor, middle class and college educated were going to take it in a few years.

Then we talk about the possibility of a non-violent revolution. After seeing YouTube videos of what’s going on in Egypt and on the college campuses in our nation, we decide against it. Stokely Carmichael is brought up in our conversation, then Angela Davis.

“Did you see that documentary yet?” I ask him.
“Which one?” Evan has a million idling in his Netflix queue that require his attention.
“Black Power Mixtape.”
“Not yet.”
“Please see it, it’s the shit.”
“Got it.”

After awhile, Evan needs to go to the used bookstore across the street and I decide to join him. It’s cold and rainy here in Central Illinois. We are hit in the faces with wind as we hurry to the other side and are met with the warm musty emporium of knowledge.

It’s too easy to lose ourselves in all of these books, so we try to stick to goals. I’m looking for Angela Davis books and he’s looking Ralph Waldo Emerson essays. He can’t get enough of those transcendentalists. Here’s some of what I got:

I’m getting into that political theorist mood and it helps to be hang out with Evan to shoot the shit. I look forward to reading these books and taking some notes on them. If they’re working out for me, look forward to a book review in the future!

Standing at the bank I keep my hands out of my pockets and stand still. I wait until I am called by a teller before approaching an empty space at the counter. When she asks what my business is, I tell her in a clear voice,
“I would like to cash this check, please.”
No one hears what happens but I do.
I shifted my voice. The teller, “Jennifer” doesn’t know it, but I’ve had changed my voice for her.

“And you have an account here?” she asks me.
“Yes.”
She can’t find me in their computer. She’s going to need an ID.
I calmly tell her that the bank had misspelled my last name when they opened the account and it was never corrected. She nods and counts my money out to me.

The whole exchange lasts no longer than five minutes but by the time I leave, I finally feel like I can breathe. I get into the car with Noah and joke about robbing banks. We laugh about that and I notice I have shifted back. I’m using my “normal voice” with Noah because I’m relaxed. But with Jennifer, I used my high register, nothing-but-professional voice. In other words. . . my white voice.

I learned how to use my white voice from my mother. Mary was all professional when taking care of business on the phone. I could hear her in the next room sorting out a phone bill flub and using such a high register, I had to do a double take. Who is that talking? Not my mother. My mother was born and bred in Arkansas and uses African American Vernacular English (AAVE) with her family and other blacks. But when she wanted to be taken seriously, she shifted.

I learned to shift too. At an early age, I knew not to say “ain’t.” I grew up not telling a white friend things like: “I’m tired of foolin’ with Debbie, she’s so triflin’.” I knew in order to be taken seriously, I had to pronounce all of my “ing’s.”
I learned to go along to get along.

Shifting: The Double Lives of Black Women in America finally put a name to the performance I was forced to keep up all my life. Authors Charisse Jones and Kumea Shorter-Gooden unveils the balancing that black women in America do everyday in their professional and personal lives. Through a vast survey, Jones and Shorter-Gooden interviewed black women all over the country, all ages and socioeconomics backgrounds and found some startling and validating results.

I learned that black women have many myths to defy. High on the list were these:

The constant vigilance to debunk these myths is exhausting. Jones and Shorter-Gooden write that because black women are always trying their best to assimilate in white culture, it’s wreaking havoc on our mental and physical health. This stress leaves us feeling depressed and anxious, but unable to share our feeling because we’re too strong for that. This stress leads to physical ailments like heart disease, diabetes or insomnia. But we shrug them off and keep moving because these are simply ailments that generally effect the black race anyway. We learn to live with it.

I worry about this sort of thing at least once a day. Everyday perceptions of other people effect me greatly, even though I’d like to think they don’t. I watch the way I dress when I go out. Nothing too revealing or youngish or over-ethnic. I’m careful about the words I choose when I’m trying to take care of business, just like my mother. I try not to talk about race relations when I’m around certain whites. If I’m forced to, I’m very vague and indifferent.

Shifting reveals that all black women are unpaid and unappreciated ambassadors of their whole race. Few other groups in America are under such pressure. The stories told in this book are so alive with emotion, I found myself nodding in agreement to almost all of them. These were candid stories that I had already lived. I knew what it was like to propositioned by white men (and black men) I didn’t know solely on the basis that I was black, female and obviously ready for sex. To them, it was widely known fact, perpetuated by media and history. It’s just one of many myth, I have to fight tirelessly against.

All throughout my college career I had doubts of my own intelligence because I was taught that I would have to work doubly hard to be seen as smart and professional. When professors told me I was “so unique.” I was instantly suspicious. Was I special because I wasn’t like the black woman image they had in their minds? Was I so eloquent because they never met black women who spoke the King’s English? I doubted my work and it’s value because I believed one day, some one would find out what kind of fraud I was.

Looking over your shoulder at every turn and covering your tracks are hard things to do.

I thought I would share this book review with you because I feel like black women experience very similar issues. The sad thing is that we can’t talk about it. The fear of exposing our magic trick seems fatal. If people knew what kind “fakes” we were, it would destroy us. But, if people knew what kind of torment we lived in on a daily basis, it could save someone else’s life. Speaking up could lighten the load we feel.

I suggest you read this book if you feel like you’re under pressure from an entity you can’t name. It’s might be called Shifting, and it might be wearing you down. Talk about it with a sister.

I’ve been reading this great book called “Curly Girl: The Handbook, written by stylist, Lorraine Massey and it’s been a great reference for curl maintenance!

“It has been ten years since I last combed my hair! Family and friends are sometimes scandalized! I am amused by their reactions. During those ten years, they have poured gallons of possibly carcinogenic relaxer chemicals on themselves, and their once proud crinkled or kinky hair has been forced to lie flat as a slab over a grave. I understand this, I did this same thing to myself.”
Her imagery is dead-on and very sad. Since letting go of the desire for straight hair me and my hair have felt more “alive.”
What kind of freedoms have you gained by letting go? 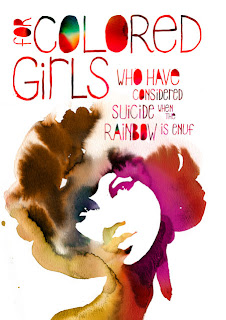 This past Wednesday, I participated in an on-campus (Columbus State University) workshop called “For Colored Girls,” named after the play/movie. It was the first meeting of minds for this all inclusive support group that covers issues from the play.

So far we have discussed race relations/understanding, body image and women in higher education. This is a weekly meeting, Wednesday’s at 12 pm and if you’re in the Columbus, GA area, you should come.

If you’re not, please get together with females on your own college campus and create a support group! School is hard enough on its own, but if you add social stresses, it sometimes leads to high drop out rates. We don’t want that for women who really want and need to go to school.

I’m the wife of a faculty member and a graduate, while attending this workshop, but feminist issues certainly don’t stop after you finish college. So even though I would have greatly appreciated something like this while I was in school, I’m not going to miss an opportunity to sit down with other women and talk about important topics!