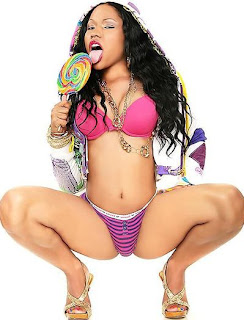 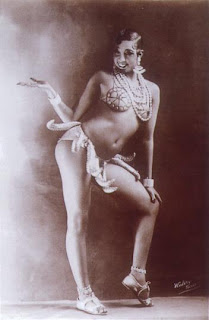 When asked what kind of music she likes, my 16 year old cousin squealed: “I love Nicki Minaj!” I didn’t know who Nicki was or what kind of music she made, but I could tell was particularly “awesome” from the way my cousin Yolanda began hyperventilating. I thought to myself, I gotta find this Nicki Minaj!
I saw Nicki on television, a beautiful woman with a futuristic pop fashion sense and comical British/Queens/Spanish accents. At the time she just seemed cute, a painted black Barbie making strides in the rap community. But then I saw the music video Monster, the latest single from Kanye West, where Minaj makes a guest appearance. (*Note: I have a lot of problems with this video and hold Kanye West accountable for most of it. If you’d like to watch an analysis of his music video and how its images are harmful to women, make a quick stop here.)
In Monster, Minaj is continuing her multiple personalities gimmick with black leather clad dominatrix persona and her sweet bubble gum Barbie persona. “Dominatrix Minaj” was fully sexed up. She was not an ordinary sex bomb, but wild, savage, and essentially monstrous. This imagery is not new at all. Black women have been represented in the media as loose Jezebels, who thick hips and asses were solely for the purpose of pleasing men. Black women were bought, bedded and sold on these physical attributes in this country three hundred years ago.
Which brings me to Josephine Baker, an American ex-pat of the early 20th, who wowed French audiences with her exotic dancing. One of the most enduring images of her comes from her performance in Danse banane. It doesn’t take too much of a leap to say the bananas are sexually provocative but they are also culturally specific. Baker was bringing to life a wild jungle image that whites expected from a black performer back then. She was also in films like Siren of the Tropics (1927) and Princesse Tam Tam (1935).  I won’t deny that Baker went on to do better things. She was a spy during the second World War and went on to be a powerful voice in the Civil Rights Movement in America.
What’s remembered, however, is Baker’s image. If we fast forward to today, we meet up with Nicki Minaj, a performer who is built entirely upon image. She graces the covers of magazine, ass first. Her hips and butt are prized and make her a 21st century “hot n tot.” She’s another sex symbol, yes, but built on old stereotypes that are harmful to black women today. Not all of us want to walk the streets representing hassle-free sex. Not all of us appreciate cat calls that bring attention to just our butts. Not all of us are performers with sex to sell.
Minaj and other black performers like her i.e. Foxxy Brown and Lil’ Kim are problematic for black women today because their image is stopping an entire group from progressing in today’s society. There is no room to grow if we’re hiding behind our “thickness.” I’m not fine with having no autonomy. I have a brain and I do other things besides dance. I write. I investigate. I change.
These are things I want to tell young black women: “You have choices!” I want to tell my cousin that there’s nothing wrong with pop music and the people that sing it, but do look closer at what else they are selling you. If you find that they are perpetuating unhealthy imagery and problematic social constraints, then you need to consider your loyalty to that artist.